So I completed the bike redesign and upgrade project in time for a nice Sunday ride. The bike performed great, it fells like a completely different bike. It was noticeably lighter and more responsive. The new handle bars and grips kept my hands from going numb, especially since I had my gloves on correctly (just kidding CK). The gear derailleurs and brakes worked well. This was a major concern considering I had to remove the cables completely to get the bike apart. I think the only thing left is a little more fine tuning on the headset; an additional 10mm spacer and maybe an 80mm neck will put them exactly where they need to be. Other than that I consider the bike done. The only parts I plan on changing are the ones that wear out and maybe moving to a CO2 kit for flat repairs instead of the bulky pump I have now.

The next major project will be to build a bike from scratch, maybe an all carbon fiber frame with Ultegra components. Then I can pass this bike down to my son since he is getting bigger and showing interest in riding with me.

Here is the ride information as recorded by runtastic. A nice slow ride through the hill country.

All the paint work is done and I figure the paint was dry enough so lets start putting this thing back together.

Assembly was pretty straight forward. The brake cables were reversed so that took a little modification but otherwise everything else went on exactly how it came off.

One thing I realized right away is that the paint was still soft so I buggered it in quite a few places putting it together. Best case would have been to let it dry two more days but that was not in the schedule if I wanted to make a Sunday ride in less than 24 hours. I have leftover paint so I can always come back and do some touch ups.

Brakes and gear shifters took some time to adjust but nothing too difficult. A jig would come in real handy here.

Handle bar wrap was a breeze. I was scared to mess that one up.

Now for the results: 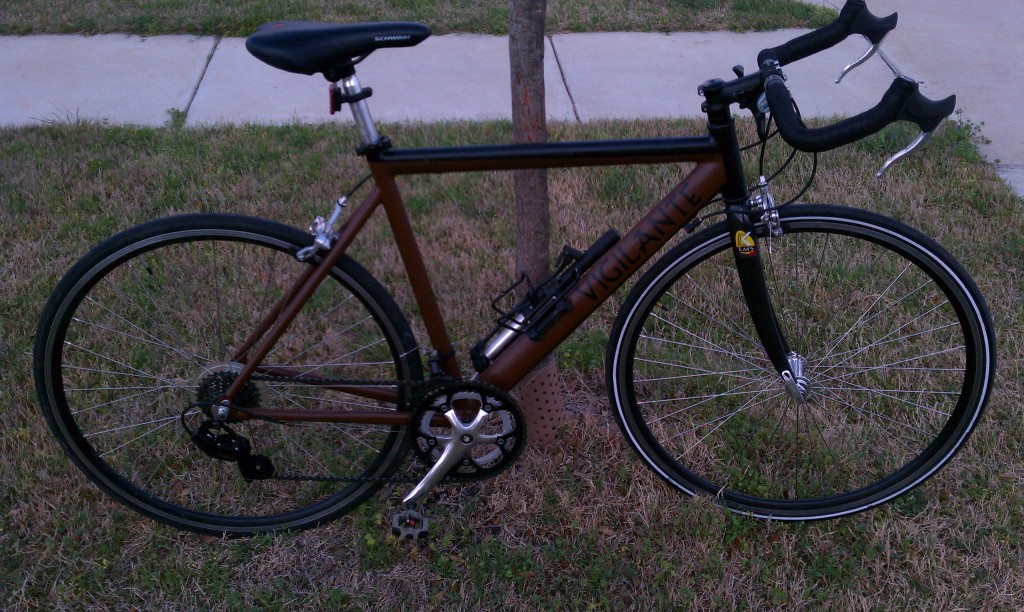 So out of pocket $83 in parts and $40 in tools that I consider an investment for future projects. Also, time well spent getting to know the ins and outs of my bike and honing a few techniques that can be applied on other projects.

I am very pleased with the final results. The bike feels pounds lighter and It feels more responsive. I like the way the paint came out even though it is far from perfect. It would have taken an additional week on the paint alone to get a near perfect results. I cannot wait to get this thing out on the road and yes I would do it all over again.

I was dared to name the bike and so I did… Vigilante is born!

All the prep work is done, ready to paint. It is easy to overlook the amount of time it takes for final prep and dry time.

Five coats of the first color and let dry overnight.

I taped off for the two tone paint scheme and my wife lovingly created contact paper lettering for the name. Then five coats of the second color go on and again let it dry overnight.

Now the protective coat goes on. I decided on a flat clear coat for that stealthy look. And guess what, let it dry overnight.

All the final paint pictures will be on the next post, until then take a look at the new carbon fork compared to the old fork. I thought the old fork was aluminum… I was wrong. It was steel. It weighed almost as much as the frame by itself! 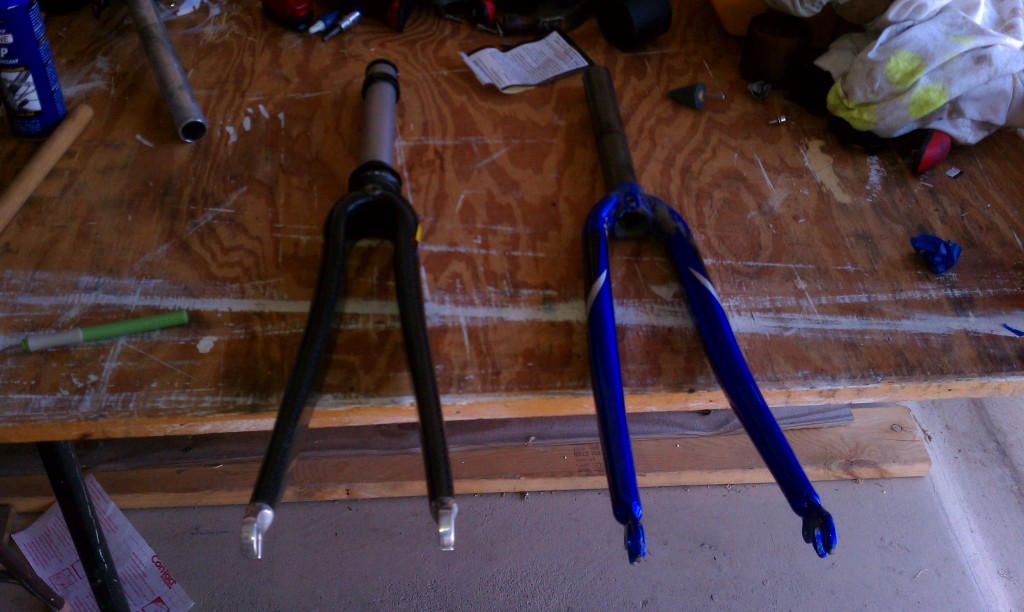 Can’t wait to ride on that carbon fork.

So I left off needing a couple of special tools. $40 later I am the owner of a chain tool for removing and installing a chain and a crank remover.

Now the frame is stripped all the way except for the bottom bracket which I do not want to mess with at all (another special tool required).

So I started in with the grinder and sander to remove the old paint and as a bonus remove the external welds. Not going to fool anyone that it is not an aluminum frame but I like the smooth look. After grinding and sanding, one layer of body filler and more sanding. At least two more applications of body filler and sanding would be required for a nice finish but this project is already over budget and off schedule.

Here is a comparison of before and after welds. 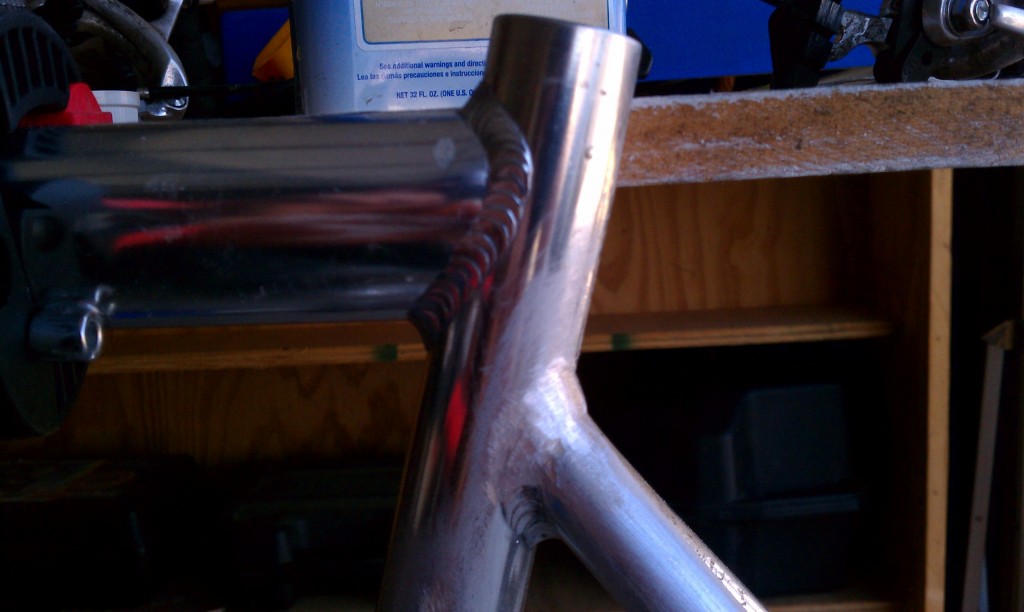 Here is the frame ready for paint. Don’t be fooled this is a good day and a half worth of sanding. 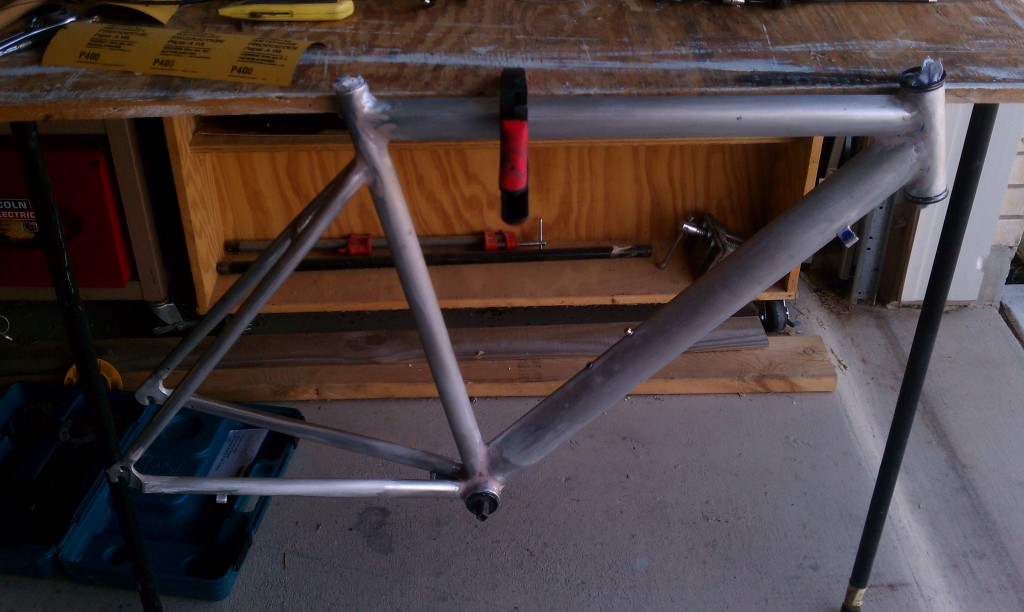 Next time, the paint flies.

About a year ago a co-worker decided we were going to compete in our first triathlon. I had been running regularly so I figured why not. Then I realized a few things, I needed to learn how to swim correctly and I needed a road bike.

I have a mountain bike but riding 20k on the road on that thing is nothing short of torture so I was going to need a road bike. A few bike stores later and my chin permanently on the floor from sticker shock I head to Academy. There I find in the sea of mountain bikes one road bike: a Schwinn Prelude. At $199 I was sold. Now after a year of riding this bike, both on weekend long rides and at the triathlon I am happy with the purchase. The only modifications have been upgraded rim tape and several tubes. Here is what she looked like Monday morning. 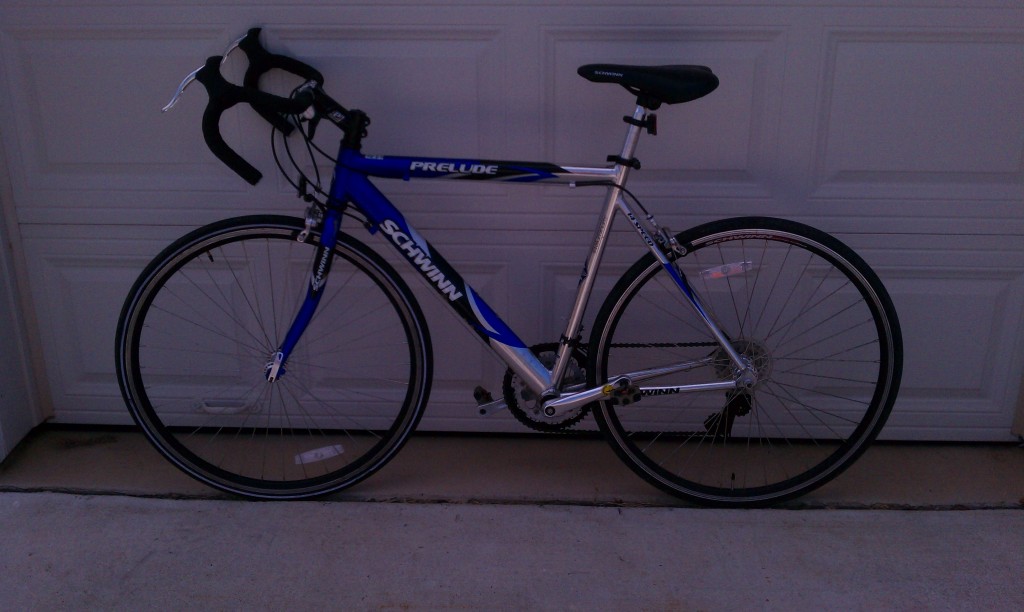 This year we have several co-workers interested in riding with us. On my recommendation one bought a Prelude off ebay for $249 since Academy no longer carries them, now they have only mountain and hybrid bikes. Here is what his looks like. 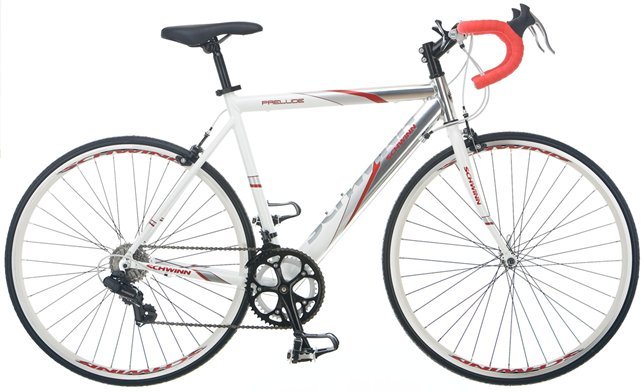 WHAT! It is beautiful! I can’t even look at my bike now. Something has to be done…

So a plan is hatched, parts are ordered and disassembly begins. Nothing crazy about tearing down a bike, especially after the tear down of my truck project (stay tuned for updates on that one).

No sooner did I get started then I realized I needed not one, but two special tools before I can continue. So here it sits in limbo until I can get to the store. (Improvised work stand performed great)

So until next time…<insert catch phrase here>

I decided to move hosting to a professional service instead of maintaining a server at home. I started breaking down the total cost including time spent administrating the system to the cost of energy to keep the server powered on and connected to the Internet. So here is sunlightonchrome’s new home. I think it will be even better than it was before.

I have a few really cool thing I have been working on in the garage that I cannot wait to post. Stay tuned…